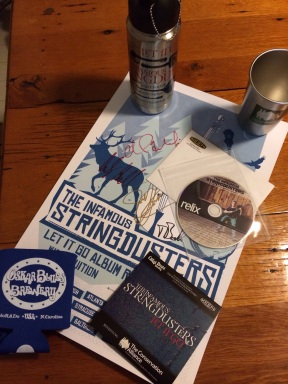 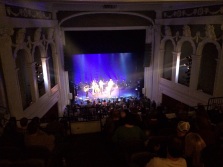 One of the hottest bands in bluegrass, The Infamous Stringdusters, kicked off a tour on March 12 to support their upcoming album Let it Go. The new recording will be out April 1 from the band’s own label, High Country Recordings.

The tour began at the Jefferson Theater in Charlottesville, Va., the home base of the Stringdusters. An abundance of amazing music included Don’t Think Twice, Middle Fork and Time to Part. A rambunctious Summer Camp went right into a killer cover of Walking on the Moon. A monster Black Rock closed out the first set. They later refreshed the oldie Won’t be Coming Back and gave fans 13 minutes of tasty licks in Jack a Roe.

After two full sets of music, the Stringdusters closed out with a double encore of Head over Heels and a full blown Y2K.

The title track Let it Go features prominently in most of the shows. Andy Falco’s guitar and Jeremy Garrett’s fiddle provide the instrumentation and the harmony of five voices carries a powerful message. Garrett’s intense lead vocal and Travis Book’s silky smooth voice blend wonderfully in this almost spiritual song.

In Raleigh, the progressive bluegrassers covered Rosalie McFall, J.J. Cale’s After Midnight and U2’s In God’s Country as well as The Band’s classic tune Cripple Creek.

Where the Rivers Run Cold has wonderful harmonies. Light and Love is another cut from the new album with some wonderful picking by Andy Falco. The Jeremy Garrett song I am a Stranger is somewhat rare but always appreciated.

In Asheville, the Dusters pulled out an infrequent cover of 3×5, a rare one from their first album, as well as Phish’s Free. Check out the video from our friend Trevor Shaw.

The Stringdusters make it easy to get hooked. Many of their shows are streamed online for the Couch Tourists and then added to the band’s Show Hive for a rainy day or anytime Couch concert.

The tour has now moved on through the Midwest and is heading to the NE in late March. As wonderful as their Show Hive is, it’s no replacement for being in the room and seeing their talent firsthand. Check out the full tour schedule on their website.