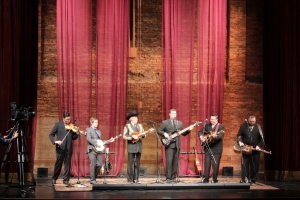 Blue Ridge Public TV has produced Song of the Mountains for several years and it’s now carried on nearly 200 PBS stations across the country. If you are a bluegrass music fan, it’s a must see. Acts range from regional bands to hall of famers.  Best of all, it’s taped in front of a live audience. Recently, on a snowy Saturday, we ventured to Marion, Va. for a taping of the show headlined by Doyle Lawson and Quicksilver. The venue is the beautifully restored Lincoln Theater in downtown Marion, Va.

Next up was the Smith Family Band from Moore County, NC. Wow, what a cute and talented family! Like only families can, their voices blended effortlessly on original songs and bluegrass numbers. I always think family groups sound great, their voices naturally blend together. I loved the picture of the smiling bass player, Allen Smith, looking over his talented kids:  guitarist Corey, 18, fiddler Nellie Grace, 15, banjo player, Luke, 13, and  11-year old Eli on the mandolin. Gospel is an important part of their music and their rendition of “A storm’s a coming” was touching.  If The Smith Family Band comes to your town or you see their name on a festival schedule, check them out!

The Grass Cats offered a solid set of bluegrass classics, including Tennessee Ernie Ford’s Sixteen Tons. The Grass Cats are Rick Lafleur, banjo, Russell Johnson on mandolin, Tim Woodall on bass, fiddler Chris Hill and Alan Mullin on guitar. Their single “The Mountains My Baby and Me” is at the top of the bluegrass charts right now.

This edition of Song of the Mountains won’t hit the air on Blue Ridge Public TV and other stations until early 2014. It was interesting to see the production of the show. It’s recorded straight through the music. After each act, the camera operators spin around as host Tim White encourages the audience to clap and smile for the audience shots. After several minutes of continued applause, the audience was ready for Doyle—a recent inductee into the Bluegrass Music Hall of Fame.

Doyle Lawson and Quicksilver presented a well executed bluegrass show. The set included several a capella gospel numbers. The harmonies between Doyle, Corey Hensley(bass) and Mike Rogers (guitar) are soulful. Other than the St. Louis banjo player Joe Dean, who was a newer member, it was the same lineup we enjoyed so much at NE State in Tennessee last year in February.

There’s nothing like quick, tight bluegrass and Doyle and the boys do it well, especially on songs like Tennessee Banjo Man and Blue Train.

Doyle told the story of auditioning for his first professional music gig when he was 18. He met Jimmy Martin at the Nashville bus station, where he was asked to play Cripple Creek. At the end of the song, Martin hired Doyle and launched his career as a professional musician. The Song of the Mountains show was presented on the eve of the 50th anniversary of that audition. Perfect timing!