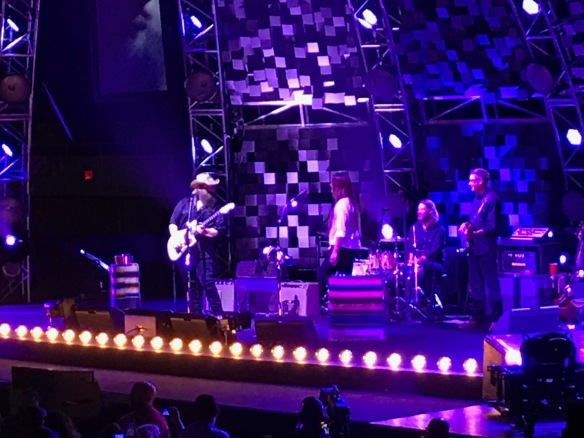 Spring music season is underway with lots of bands hitting the road as the weather warms up. Months ago, we bought tickets to see Chris Stapleton in Roanoke. The show sold out quickly so we were glad to get in the door and it’s been a long wait!

Roanoke’s Berglund Colesium was packed with loud, energetic country and bluegrass fans. Stapleton’s first solo album, Traveller, was a big country hit. Lots of folks thought he was new to the scene but he’s been traveling the music road for years. He was a big part of The SteelDrivers, a great bluegrass band. He wrote songs and provided those strong vocals for the band.

Stapleton brings the audience back to what country used to be, not pop-country but old school, authentic country.

This two-hour set included several favorites from Traveller and a few older tunes from the SteelDriver days. The show was on April 20 so he opened up with Might as Well Get Stoned. 😉

Stapleton’s lyrics are often simple but pure and beautiful. Running on hope and a tank gas, like dreams ain’t just for dreamers,” he says in When the Stars Come Out. Another nice line is “I drink because I’m lonesome and I’m lonesome because I drink,” in Between Whiskey and Me.

Stapleton is a triple threat. He’s a fantastic guitarist. He’s long been a successful songwriter, with number one songs recorded by artists like George Strait and Kenny Chesney and his songs have been on albums from a variety of country artists and even Adele! But his real strength, in my opinion, is his pipes. His voice has depth and variety and those slow bluesy songs give him plenty of opportunity to wail on the lyrics. The combination of all of that, plus about 9,000 screaming fans, is something special!

Other highlights included Country Song, Parachute, Fire Away, complete with a cell phone and lighter candlelight ending all around the audience. He ended the show with the hit Tennessee Whiskey and sang intros for all the band, including several sweet lines about his wife, Morgane. What a romantic!

His band for this tour was a four piece group with a drummer and bass player, plus his wife, Morgane, on vocals and Chris plays guitar and belts out wonderful country tunes.

I wish the sound had been clearer when he talked. It was difficult to make out what he was saying as he chatted between songs.

He played a song from his new album, From A Room: Vol. 1. It’s out in May and is one of two long awaited albums he will be putting out this year. Can’t wait to hear them!

@ringostarrmusic had one message last night in Roanoke. Peace ☮️ ✌️
Roseanne Cash @mrslev is retiring her Dad’s guitar strap. Here’s her guitar before her set at the Wayne Henderson festival in 2013.