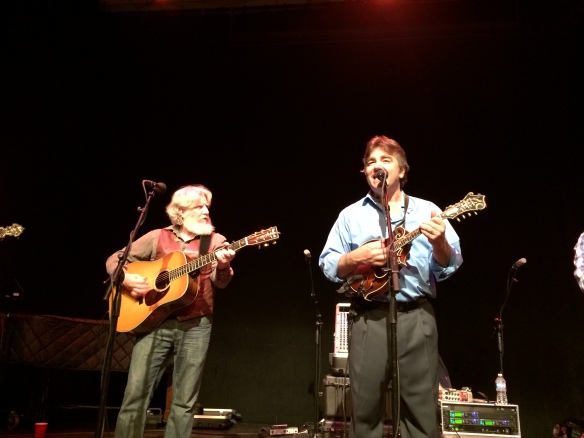 The Jefferson Center in Roanoke hosted a night of bluegrass in late March. Hot Rize, The Del McCoury Band and then a late night show by The Travelin’ McCourys.

Hot Rize took the stage first and gave a strong bluegrass set. Tim O’Brien, Pete Wernick, Nick Forster and Bryan Sutton. Each one of them are amazing in their own right and they form a strong quartet. Their set was supplemented with Red Knuckles and the Trailblazers, a somewhat outrageous country western band with suspiciously similar line up to Hot Rize. 😉 Cowboy boots, ten gallon hats, sequins and even red fringe on the guitar. They’re a sight! Hot Rize came back out with more bluegrass to wrap up the set.

Next, main man Del McCoury took the stage with his fine bluegrass band. He led off with Traveling Teardrop Blues. Del may have a set list but every time we’ve seen him, he relishes the chance to ask the audience what they want to hear. As audience members yell out requests he discusses them from the stage in his wonderful tenor. “Oh sure, we’ll play that one.” Often he gets ready to start a requested song, only to redirect the band and start up another song.

Hot Rize members came out at the end and played with the Del McCoury Band. They all joined together to play Roanoke, a song named for the  host city.

One of the requests was for a gospel song and it was the high moment of the show. Get Down On Your Knees and Pray featured beautiful harmonies and created an uplifting moment. Take us to church, Del! Amen!

During the set breaks of the main show, we were fortunate to meet Bill Nershi of String Cheese Incident. He was there to play guitar for The Travelin’ McCourys in a late night show. We had not planned to stay but we were so glad we did.

For those who aren’t familiar with the Travelin’ McCoury’s, it’s basically Del’s band with a guest guitarist. Go see them if you get a chance. Tight band and always with fun and different guitarists.

* No cameras in the Jefferson Center so apologies for the cell phone images. All pics from Travelin’ McCourys set.