We caught Stonecaster at the Wolf Hills Brewing in Abingdon, Va. Fun brewery with live

Scott Thomas on the drums 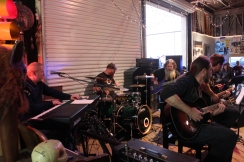 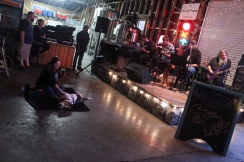 The ever popular Timmy in front. Rock and roll dog!

music, an outdoor picnic and play area. It’s even kid and pet friendly.

My brother, Scott Thomas, plays drums for the band. I had heard the Stonecaster music online but not live so it was good to hear them in person. Greg compared them to Nirvana. Not sure how I would describe them. Alt-country perhaps. Whatever the flavor, they were good! Catch them at venues around Bristol and the Tri-cities area.

Scott also plays with other bands too, including JP Parsons and American Bandwagon and he recently toured with Nate Hall.