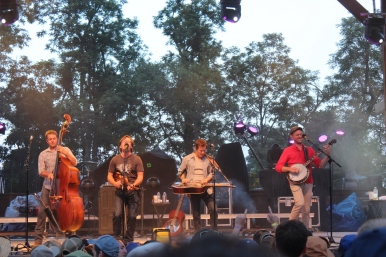 Jason Isbell and the 400 Unit

Floydfest is a great festival situated outside the quirky, music loving town of Floyd.  It’s grown over the past decade and this year was probably the biggest crowd ever and it sold out. FF has a wide variety of music, some bluegrass, some rock and roll and some world music.

For some reason, we didn’t catch as much music as we usually do but we had fun and saw some old friends. If you go to shows long enough, you start to see the same people and soon you have music friends. It’s one of the best things about festivals!

FF opened with The Green Boys, an acoustic, grassy, country band from Richmond. We drove into the parking lot behind a car with Green Boys bumper sticker and they encouraged us to see the band. They were the first act of the official FF schedule and we were lucky to catch their show at the sweet Workshop Porch stage. Check them out if you get the chance.

Next we caught part of the set from L shaped lot and they were rocking the Hill Holler stage to an appreciative crowd. On the Dreaming Creek Main stage, Langhorne Slim and the Law rocked the crowd.

The first night headliner was the Lumineers. I’d heard a lot about them and this was our first time seeing them. The stage was a fancy set up with three huge chandeliers and decorative railings. I liked their old school vibe and acoustic, dance friendly music and they had a big crowd. They were booked for a two-hour set and I was surprised when they wrapped up their set after an hour and 15 minutes. They played another song or two for the encore but I’m pretty sure they left the stage with nearly 30 minutes of their set still on the schedule. Ironically, the next night, during the Jon Butler Trio, he complemented FF for giving artists a huge two-hour set – a festival luxury for an artist. I felt if The Lumineers couldn’t play the full set, they should have taken an earlier, shorter set and left the two-hour headlining slot for someone who would play it in full. We read something quoting someone from the band saying they only had about 40 minutes of material but I thought it was a joke!

Friday was another beautiful day and we enjoyed Jason Isbell and the 400 Unit, as well as a sweet acoustic set by Railroad Earth at the Workshop Porch. Jason Isbell really interests me. I heard an NPR interview with him and he’s been through some challenges but he seems to be on a good track now. He’s all over the media.  He used to be with the Drive By Truckers and now performs with his own band.

Highlight of the festival, was the Infamous Stringdusters. Admittedly, they are our favorites and they’ve become friends. They played the great song 17 Cents for us for our 17th wedding anniversary. We heard a new Stringduster song at FF, the wonderful Let It Go. I predict this will be one of their best. Written by Duster fiddler Jeremy Garrett and Jon Weisberger, it’s a song about letting go of the things that worry you but you can’t control. What a great message and presented in a soulful package full of deep harmonies. Way to go Dusters! Their Friday set featured an incredible Floyd sunset, so beautiful they had the crowd turn around so as not to miss it. Then Saturday, they were the first band to hit the Main Stage band after the deluge of rain. They got the crowd dancing, despite the mud.

Jon Butler Trio was great. Didn’t catch his full set but he is way talented. Some of the show features looping like Keller Williams does. We caught a bit of Brandi Carlisle. She’s popular and had a good crowd but I’m not sure she’s really my taste.

We also caught Bombino, rockers from North Africa. Their music was reminiscent of a rave beat. Catchy and danceable but the groove became repetitive after a while.

Schedules at multiple stage shows are always tough and you usually miss something good. But I really hated the big Railroad Earth show and Yonder Mountain String Band were both too late for these old hippies. Established groups like these, who help bring fans to the festival, deserve an earlier slot, especially when some bands were playing multiple sets.  Yonder played only once — at midnight. I know, it makes us old not to stay for the show but we were driving back home so it was just too late. Bummer.

Overall, the beautiful location and weather was a treat. The music and experience were fun especially when the sun was shining. I wish it hadn’t rained for Saturday and Sunday. Unfortunately, it changed the experience for many fans. More thoughts on that in another post.